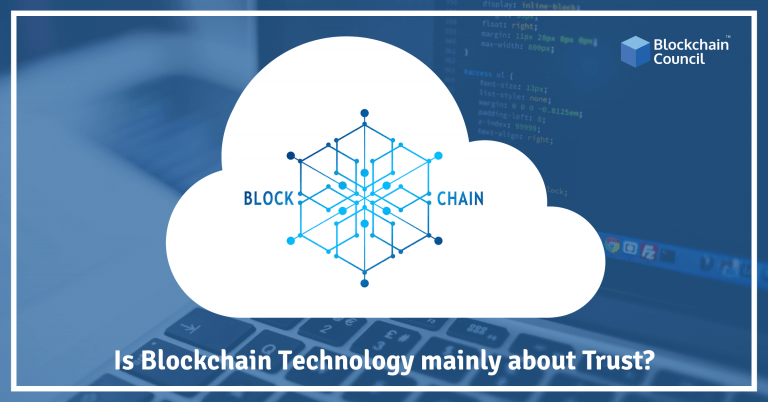 Blockchain, the technology for tomorrow holds many promises and is considered as the underpinning of the future. Primarily, it is known for being the underlying technology for Bitcoin and other cryptocurrencies, but it has broken the ceiling and has showcased its applications in various other fields like healthcare, finance, supply chain, retail, shipping, etc. To sum up, I can say that it is the technology which will revolutionize the normal course of business operations.  It is said that Blockchain creates trust. My objective writing this blog is to enumerate the fact, whether Blockchain Technology is mainly about trust or not?

Well, as far as I believe trust is the key factor for relying on anything, where it is the current system that we are working on where people trust the third party, or it is Blockchain where we ditch the third party, and the person has to trust on the technology itself.

Let me try to elaborate it for you, for example, if there is a trade between two parties and there is a transaction that needs to be done, in the current scenario, they need to trust the third party platform which could be the bank or Paypal or any wallet. However, if we bring Blockchain into the picture, then we eliminate the need for the third party. Blockchain allows peer-to-peer transactions which mean there is no need of the third party, the two people deal with each, and they trust the technology to go ahead and do the transaction. An important point to note here is that all these transactions are uploaded in the digital ledger called Blockchain and is easily auditable.

This brings me to define the term Blockchain for you. The Blockchain is the digital distributed ledger. It is a platform on which the transaction takes place, and the information gets uploaded on the digital ledger.

Here are the key features that make Blockchain an inevitable technology of the future:

With Blockchain you don’t create or eliminate trust instead it converts from one form to another, like we don’t trust a third party instead we trust on the technology.

What makes me apprehensive is that till now we have not seen any example in the form of money that has worked without the backing of any central governing authority, except for gold, so it is not clear whether Blockchain powered currency could go in the mainstream without being backed by a trusted central authority.

To understand why we say that trust is an essential ingredient of Blockchain technology, we must know how it works. For example, when you make a money transfer via banks, then the bank will check whether you have sufficient funds or not, once it verifies the funds it debits your account and transfers the money to the recipient. Here we are relying on an institution, bank which is regulated and governed by some authorities. However, when we run the same scenario on the Blockchain platform, then it is verified by the miners who are the supercomputers. This information is then encrypted, and a block is added to the ledger.

Here you can see that there is no involvement of a third party or any governing body. Instead, it’s the computer which is doing everything. So, you don’t trust an authority rather you entrust the Blockchain system.

Although it seems quite overwhelming at the same time there lies the problem, the user must trust the technology and the governance of the system.

When it comes to Blockchain technology trust is the key aspect of it. We cannot ignore the fact that the two parties who are trading must entrust each other and the system . All the transactions are executed and settled on the ledger itself, the parties trust the system and go ahead and so the transaction. It opens up new avenues of customers for business working on Blockchain technology.

What are the best reasons to adapt Blockchain Technology?
Scroll to top