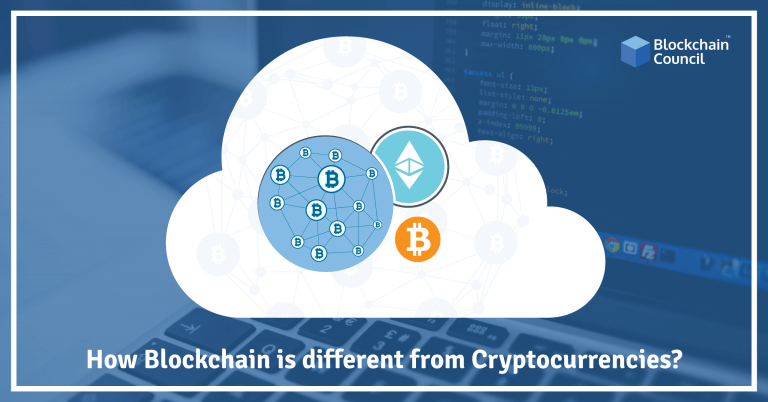 One of the most common topics of discussion that you might surround you is regarding, blockchain and bitcoin. Another thing that pops out of it is whether the Blockchain and Bitcoin or the cryptocurrencies are different or they are the same? To keep it short, I will say, they are different. Whereas Bitcoin is the first cryptocurrency that came up in 2008; Blockchain was the underlying technology. Bitcoin was one of the first and must say the most successful application of Blockchain since the time it came into existence. However, with its surge came up the confusion, between blockchain and cryptocurrencies? Although initially both were used interchangeably, now we know that both these things are entirely different. And in this blog, I will highlight the difference between the two.

How are Bitcoin and blockchain different?

Before heading further to the in-depth analysis of the difference between cryptocurrencies (Bitcoin ) and blockchain, let’s have a quick recap of this concept.

Bitcoin- As we all know was the first cryptocurrency or digital currency as we say Bitcoin is a kind of unregulated currency which came into the picture in the year 2008. It gained popularity, and we got the new type of currency called as the cryptocurrency. It’s unregulated and free from government currency control regulation. The objective behind this was to come up with a system that bypasses the need for a third-party platform, reduce the processing fees and fasten the pace of transaction globally. All these procedures required a system or technology in place that could ensure a secure way of transaction.

Blockchain formed the underpinning technology that helped in the transfer of money. This technology was a distributed ledge on a peer-to-peer network, public and anonymous. In simple words, Blockchain had all the features that were in sync with the need to create a system of the safe, secure and transparent transaction which is also anonymous and free from any regulation.

It was the crux of the difference between the two. Here onwards, I will be highlighting the other differences between blockchain and cryptocurrency.

Cryptocurrency is just one of the application of blockchain. This technology has far more uses than only cryptocurrencies. It can be used for a much broader range of assets like cars, properties, luxury products, food products, etc.  An example of this is Everledger. It makes use of blockchain to trace the provenance of luxury goods with intent to minimize fraud, tampering of documents and information.

When it comes to choosing between the two, Blockchain is more trustworthy than Bitcoin. Blockchain has a cleaner reputation as compared to Bitcoin. Many reputable financial institutions like JP Morgan, Goldman Sachs, Bank of America, have conjointly expressed great interest in implanting blockchain technology for streamlining and fasten the banking process. Banks can increase the tendency of their transaction by using their permission blockchains.

The blockchain is highly versatile

When it comes to versatility, then Blockchain is a technology with a multitude of features. Bitcoin, on the other hand, is less versatile. Moreover, it is unregulated which makes the use of Bitcoin a taboo in some nations of the world. On the other hand, blockchain is finding myriads of applications in the different field. From healthcare to supply chain management, the companies are using this technology to develop a more evolved and streamline the process of functioning.

Why will blockchain transform the global economy?

When it comes to its future, then blockchain is dynamic technology and similar to the internet technology which changed the world, it is expected that blockchain will also do the same. More and more companies are now shifting their focus to this technology. By design, the information once entered in this distributed digital ledger is unalterable and unchangeable. Thus, establishing better trust in the business network. It not only saves time but also makes the system even more transparent and secure. It is the primary reason that Bitcoin and other cryptocurrencies gained popularity. However, with its growth, there were many apprehensions surrounding Bitcoin. But, amidst all this Blockchain emerged as a new avenue of growth and futuristic technology which could solve all the issues related to the current technology that we are using.