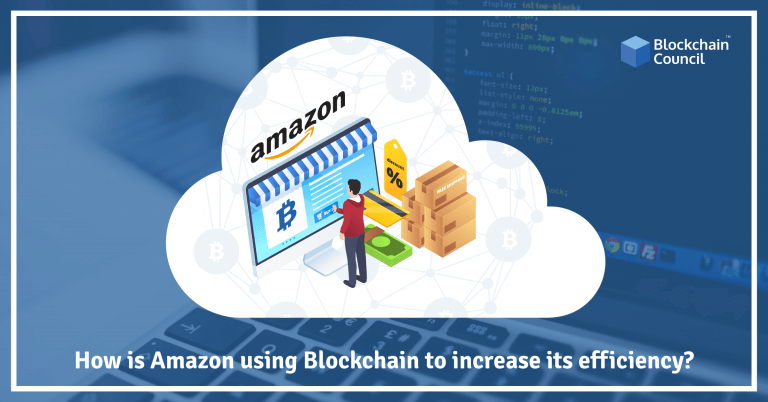 Blockchain has stirred a new wave of a technological revolution for most of the business. Starting off as the underlying technology for cryptocurrency exchange, blockchain has expanded its horizons and now finds application in the various business niche. From healthcare to shipping, Blockchain Technology or DLT as we popularly know has become the key driver of growth for many industries. The impact of blockchain is not only felt in the burgeoning enterprises and start-ups, rather, some of the big names are also plunging into this pool to reap the benefits out of it. Companies like Amazon, Wallmart, IBM, Infosys, Microsoft, UPS, are some big names that are exploring the use of blockchain. These companies are trying to implement Blockchain Technology in their daily business operations and to make it more efficient. In this blog, I will be focusing on Amazon’s move towards blockchain application.

To understand why there is so much buzz about blockchain and its application in the different field, it is important to know why there is a need for new technology. Why the companies are focusing on bringing in a technological transformation. The answer to this lies in the fact that our current system of business operations is not so effective. It has certain bottlenecks which affect the productivity and the output. With the help of Blockchain Technology, the companies are not only aiming to bring in the change of working but also plan to make the processes faster, easier and transparent.

Blockchain offers a probable solution to all this, but first, let’s analyze the problems of the current system:

How will Blockchain solve problems?

Well, when we talk about Blockchain, then it is completely different in its modus operandi. The way of functioning of DLT is entirely different. Firstly, the blockchain ledger is completely transparent to the people in the network. It means that people in the system can easily trace or track any information. Its also true that Blockchain will work in collaboration with IoT to create a system of trust and transparency.

When it comes to storage of information, then Blockchain offers a series of benefits; decentralization of information and easy tracking of data are the key features of the blockchain. All these make blockchain versatile and useful for various organizations. The blockchain is a digital distributed ledger where all the information is present in chronological order, or simply, it is time-stamped. This feature makes it easy for the people in the network to track the order and get to know the details of it.

Amazon one of the biggest industries on the global front is trying to explore blockchain for its usage. Let us see what the company is doing?

It is a cloud service platform that offers myriads of services like it initiates data storage, content delivery and hosting services. This platform will now work as  “blockchain-as-a-service” (BaaS) offering. The name AWS Blockchain Templates launched this blockchain based services by Amazon. This will put Amazon in competition with films like IBM and ORACLE which are already working in this domain,

How do Amazon Blockchain Template works?

Amazon has simplified the complex task of creating, running and meaning blockchain by outsourcing the operational work of blockchain.

Its like Amazon will rent a blockchain from the blockchain provider.  They don’t have to spend on management and running of the blockchain system. It will eventually save the cost and time of the company so that Amazon can focus on its core business area.

The company can quickly set up  Ethereum- or Hyperledger Fabric-compatible blockchain networks. AWS Blockchain templates work as open-source frameworks. It allows easy and instant deployment of blockchain software. This will help in creating their decentralized network as per the choice of the company. The crux of the matter is that AWS template allows the client to manage and monitor their hosted blockchains easily. The objective behind the development of AWS blockchain is to create a reliable environment for the business partners and financial institutions.

It’s an undeniable fact that blockchain applications are slowly picking up the pace. It has outgrown its conventional usage for financial transactions, and it now finds applications in myriads of other fields. With this blockchain has opened new avenues of growth and development. It will make the business operations more efficient, effective, time-saving and cost-effective.

Why is Blockchain on the High Seas?
Scroll to top