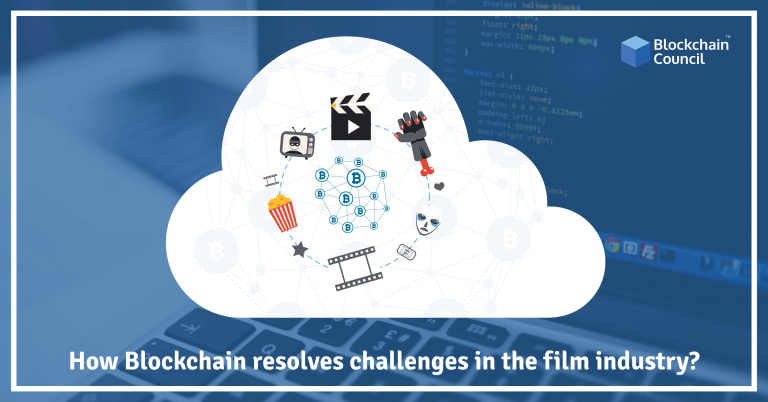 Technology is evolving each day and blockchain is attracting more and more curious minds into the scene each day. Each and every industry is now being positively influenced by the blockchain technology, thanks to its decentralized, immutable nature. Blockchain, as a decentralized digital ledger, is a way to verify and record each and every transaction over an encrypted, secure platform. It provides businesses with much-needed transparency. Blockchain technology aims to reduce transactional friction by democratizing oversight over digital assets.

Some of the industry verticals which have embraced blockchain are healthcare, supply chain, manufacturing, transportation, banking and finance, government agencies, real estate, entertainment and much more. Of these, this article will throw light on the ways in which blockchain helps the film industry overcome the challenges it faces.

In the 21st century, the film industry is immensely benefited by the blockchain technology as it supports the global network of the audience, distributors, and content producers. It provides a great opportunity for all the stakeholders of the film industry comprising of small and independent producers, traditional distributors, modern-day internet-based content streaming platforms, and global studio powerhouses.

Let’s understand a few of the many major challenges faced by the film industry.

How Blockchain Comes To The Rescue

For the film industry, establishment and protection of copyright is a difficult and costly task. Fines and litigations act as a major barrier and threaten the very existence of small, independent distributors and producers. Original story ideas are often exploited through unacknowledged or incorrectly assigned rights. This is where blockchain comes into the picture. Blockchain helps the creator of an idea or script register a copy of it on the blockchain for appropriate rights. An immutable record of an asset such as an idea, script, character, or story can be created on the blockchain. Smart contracts (digital, self-executing contracts which contain the terms of the agreement between a buyer and a seller) help define the rules governing the assignment of rights to TV and airline versions, international releases, and merchandising licenses.

Over the years, incidences of films being leaked online have tremendously increased. Piracy is a big burden and a major expense for movie studios. Sometimes, the situation can also be vice versa where content creators are exploited by movie studios as they might not hold a major stake in a film’s production or revenue. Though blockchain may not be an end-to-end solution for piracy, it can be used to deter the process of content getting leaked illegally. The distributed ledger technology of blockchain creates an immutable record of transactions on any creative work, idea, or asset. Smart contracts and tokens (representation of a particular asset or utility) can be utilized for signaling content owners, search engines, and ISPs (Internet Service Providers), screening and broadcasting, legitimate film uploads whenever a non-blockchain-enabled content is discovered online.

Blockchain offers opportunities to independent production houses and emerging regions which have limited audiences and infrastructure. If the rights of an independent film are purchased by a larger studio, the details of the resulting profits can be shared on the blockchain. This offers absolute transparency. Blockchains such as Ethereum can be used for setting up virtual entities and autonomous institutions to fund projects via ownership and shares. It provides access to a global pool of investors thereby allowing to purchase, sell, or trade their equities.

Thanks to distribution models, film releases now reach a global audience. Traditional distributor and exhibitor networks have expanded by partnering with international partners who control local distribution. The blockchain now serves as a scalable and decentralized solution. It manages the increasing complexity of digital distribution models and global networks. Smart contracts can be used to enable automated revenue distribution when receiving and recording collections. This scenario benefits small, local exhibitors and independent producers as audiences can use cryptocurrencies to pay for tickets and share collections before the show screenings are completed.

Blockchain paves way for movie lovers to be an integral part of the entertainment economy. Blockchain helps shape the creative process of the film industry. Fans in support of the creators will now be able to monetize their passion by playing a vital role in driving the process.

Blockchain technology is now being increasingly used by filmmakers as a film distribution channel which has signaled a positive shift in the manner in which content is shared and viewed. This major transformation will certainly be a happy ending. As implementation of blockchain frees the film community of the risk restrictions, large budgets, and intense scrutiny, the game will, from now on, be about quality too, apart from just numbers and rankings.