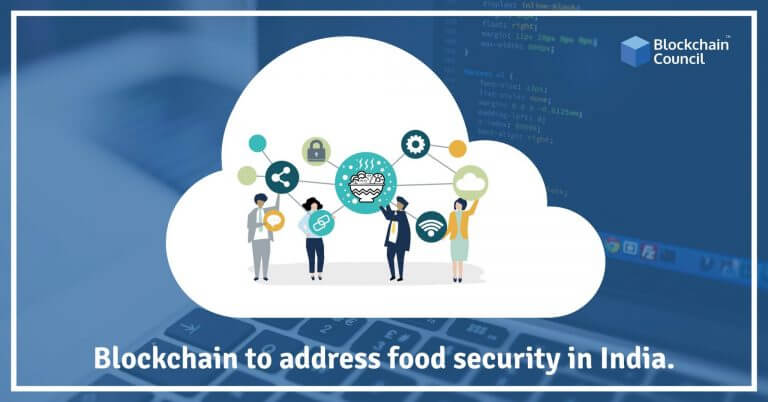 Blockchain and inventiveness go hand-in-hand. You would hardly find a day when there is nothing special about this technology’s application. Today there is a number of companies and nations investing in Blockchain technology and its application. When we talk about India, though the pace of growth is not as fast as the other nations, we are slowly and steadily moving towards Blockchain. Startups are working towards exploring the usage of Blockchain technology in different fields, and at the same time, we are also focussing on how Blockchain will address the food security issue in India. It might sound a bit surprising to some that Blockchain is more than just financial transaction. It finds usage in unconventional fields like healthcare and food industry. In this blog, we will be exploring how Blockchain will help in solving the food security issues in India.

India, one of the biggest nations when it comes to population and with tall claims of progressing on the path of development has around 200 million people sleeping every day without food. India ranked 105 in the 2018 hunger index. These dismal figures raise eyebrows and questions when India has a strong position when it comes to agriculture production. The paradox between food surplus and hungry people in the nation is a matter of concern.

Another reason for such a concern is that currently, India produces more food than what is required. The country has a stock of 68 million tons of wheat and rice which is twice the level set for standard norms for national buffer stock. It is not just in the matter of cereals, but the milk production has also increased four times that rate of population growth.

Did you know that India’s Public Distribution System (PDS) is one of the largest food distribution programs in the world? It distributes over 19 million tons of rice and wheat to around 27 million citizens of the nation. Apart from this, India also produces approximately 600 million tons of fruits and vegetables, but what’s more sadistic is that around 15% -30% of it gets wasted because of poor logistic support. With millions of people sleeping without food and many died because of hunger and malnourishment, it becomes a matter of concern why in a nation which is agriculture based and is producing such high volumes of food, people are dying because of lack of food.

You would be amazed to know that as per the World Economic Forum reports for 2015-16, the food production is not the main concern, what’s more concerning is that a nation which requires 230 million tons of food to feed its people, the country produced 270 million tons. So, what exactly does this mean? It means that there is a lack in the distribution system which we are not able to track.

How will Blockchain solve this problem?

The Blockchain is considered to be a panacea for most of the sectors, including the food sector. The Blockchain is referred to as electronic ledger where the information storage takes place at every point. Decentralization, provenance, and transparency are the key features of Blockchain which make it the technology of the future. And a prospective solution that the current system is facing. One of the key deduction that we can draw from the above-mentioned problems is that India is not lacking in food production. India is lacking in food distribution. Sudden inflation in the pricing of food products despite huge production is a problem that remains unattended. It is primarily because of the participation of intermediaries at various level of distribution.

With the help of Blockchain, we can cut down the problem of intermediaries. As we know, one of the major benefits of Blockchain is that it doesn’t need a third party interference. The interaction takes place between the buyer and the seller and thus, there is no commission sharing or processing fees involved. In a similar framework, food security in India can be addressed. When the seller would be able to directly connect with the producer or the farmer in this case, then they can decide the price without the influence of third-party or intermediary. This will help in creating an even distribution and also help in controlling the inflating price of the food.

This was one of the problems, another major problem that plagues the India food distribution is the channel of distribution. In the current scenario, we don’t have an efficient system working for us. Most of them are using conventional technology which is not so well-equipped. With the intervention of Blockchain technology, we can admit that tracking of food product from the time it is dispatched to its destination can be tracked. Every place where the product halts or stops gets stored in the ledger which can later be used to check the status of the food. Also, the agencies can use this feature of Blockchain to curtail the problem of black marketing that is one of the major reasons for food price inflation in India.

Currently, the nation is engrossed with many problems and food security remains one of the major ones. It needs quick attention especially in the times when we have millions of people dying because of lack of food. Blockchain can be a probable solution to cater to this issue. However, it is just the starting but definitely a strong one.

5 Predictions for Blockchain and Cryptocurrencies In 2019
Scroll to top