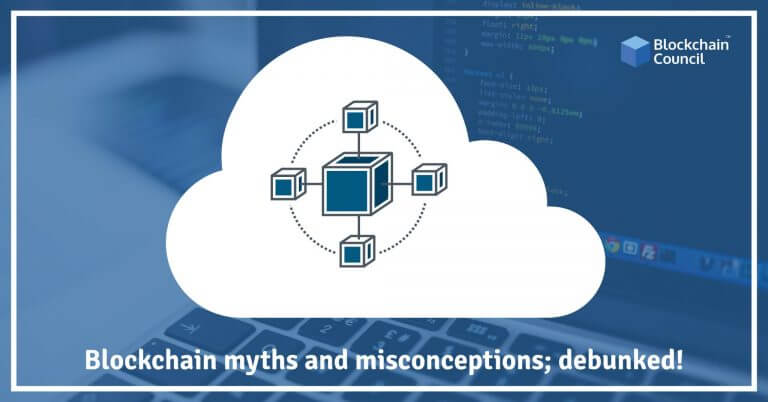 If we talk about Blockchain then it’s a cryptographically secured ledger which provides a digital distributed ledger platform for the exchange of digital assets. This digital asset could be anything, from information to transactions. This information exchange gets added in the system as Blocks. Every block is stacked upon the other, and thus it is difficult to change or alter the data.

Cryptographically secured, transparent, immutable, faster and time saving distributed ledger technology, that’s what Blockchain is all about. In the last decade, we have seen a whopping rise in the popularity of Blockchain, and we have seen some vast development surrounding it. But as alluring this technology appears, it has its own set of drawbacks which make us rethink about the wide acceptance of this technology. There are various myths surrounding Blockchain technology. In this blog, I will try to break those myths and bring forth the facts about Blockchain.

The reason it is safer than other system is that while a transaction is being processed in the network, then a broadcast is made to all the nodes. All the participating nodes verify the transaction by solving a complex set of algorithms. So, a person who tries to hack or alter the system needs to break through thousands of computers involved in solving the algorithm, thus making it an impossible task for the hacker. And hence, Blockchain becomes a safer environment.

Blockchain continues to evolve and has given us a hope to formulate a new ecosystem of work. However, Blockchain when works together with IoT and AI then it becomes even more powerful and efficient and that’s what the companies like Amazon, Siemens, IBM, Wallmart, Microsoft are eyeing at.

How Can Blockchain Transform The Use of Pharmaceutical Drugs?
Scroll to top