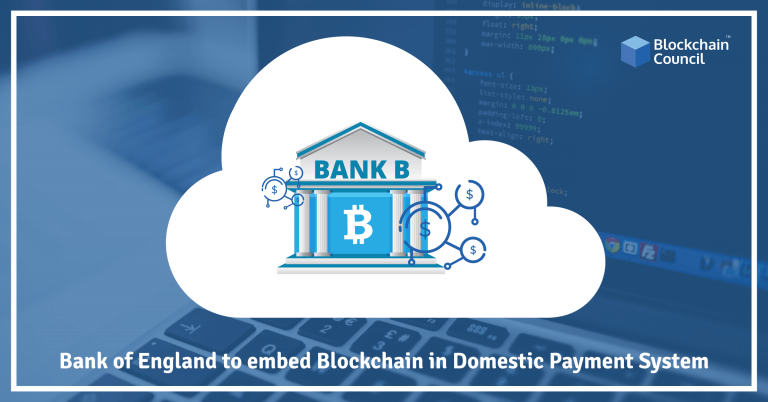 Blockchain technology has taken the world by storm. Today you can hardly find a conversation which is not influenced or impacted by Blockchain. From healthcare to finances, Blockchain finds application almost in all the domains. The technology was initially only limited to Bitcoin and other cryptocurrency exchange. However, later the developers and researchers deciphered new uses of the Blockchain, and thus it became the technology of the future.

Blockchain comes with a multitude of features which can easily solve the problems that we are facing with the current system. It can be helpful in creating a system which is free of error, transparent and traceable. The use of Blockchain in a financial transaction is the most conventional and popular ones. Most of the companies are trying to use this technology to create a seamless and flawless mode of payment, and the Bank of England is the latest addition to the list. The bank is trying to incorporate Blockchain as a part of their payment and settlement system.

Before heading further to understand how the Bank of England is making use of this technology, it is important to understand a bit about Blockchain and its features. The Blockchain is also popular know as DLT or Distributed Ledger Technology ( I will be using DLT and Blockchain interchangeably in the blog).  This is a platform which aids peer-to-peer transaction nullifying the need to have a third party involved in transactions.  Thus, DLT becomes the most wanted technology for people willing to trade without paying hefty fees. Moreover, it is a quicker system; it means the time consumed in verification and validation is much less as compared to the current banking and financial system.

Another great feature of Blockchain is that every information is time-stamped. It means that ledger record everything with time, any change in the data or information can be easily tracked and seen by the people in the network. Thus, making DLT immutable and unalterable.

Summary of the key features of Blockchain :

To sum in simple words, here are the noteworthy features of Blockchain :

What is the Bank of England doing in this domain?

Since 2009 till the current time, every day we can hear about companies taking the initiative in using this technology to improve their services and the Bank of England is the latest addition to the list.

The Bank of England is currently working on Proof-of-Concept to check if its RTGS or Real Time Gross Settlement will benefit from Blockchain or not. The senior authorities claimed that they need innovation in their securities settlement procedures and Blockchain Technology can offer the same.

RTGS is used to transfer money from one bank to another in real-time. The real-time ensures that you don’t have to wait for longer durations, and can easily exchange funds from one bank to another within and outside the nation. Although the current RTGS system is fast and quick, it still consumes a lot of time. With the implementation of Blockchain Technology, we can significantly cut down this waiting time thus making business operations even faster and quicker.

However the bank authorities have said that the system is still not mature enough, but the company is working on improving this technology to make it a part of the mainstream. Bank of England is working together with Clearmatics Technologies Ltd, Token, Baton Systems and R3. These companies currently have access to the Proof-of-Concept: a cloud-based system.  With the help of these companies and Blockchain Technology, the Bank of England will try to improve the RTGS system of payment which will eventually benefit the people looking for quick transaction medium.

The Bank of England is just one name on the list; many other companies are working towards exploring various uses of Blockchain Technology. Some of the prominent names include Walmart, Microsoft, Amazon, IBM, etc. All these companies are trying to explore the usage of Blockchain in myriads of the field, all of which aim to create a transparent system of work which is foolproof and free from any hacking.

Blockchain – A Healing to Financial Crisis
Scroll to top