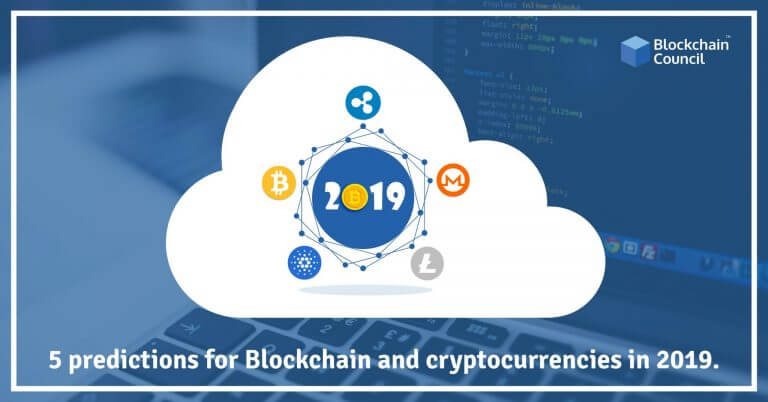 The sentiments around Blockchain seems to be gripping the world strongly, especially the startups and some of the big names in the industry have show inclination towards this technology. Well, the revolution of digital currency that started off in 2009 continues to grow and take the world in its grip. We have seen many transformations in the healthcare, supply chain and most importantly the financial sector. Despite its huge potential, Blockchain has suffered the wrath of criticism from many.

There are two sides when it comes to Blockchain, one which is focussing on the growth and application of Blockchain, while there is another side which sees Blockchain as a bubble that is not going to last for long. This has led to a series of predictions around this technology. 2018 was all about Blockchain and its application development, the question arises, will this growth continue in 2019 as well? In this blog, we bring you 5 predictions for Blockchain and cryptocurrencies.

Before heading to the predictions, let us take a quick recap of what this technology and what are the underpinnings of the same which makes it such an inevitable technology of the future.  The Blockchain is the distributed ledger technology which stores the information or data exchange in chronological order. Time-stamping of the same makes it very easy to track and trace the data. Cryptocurrencies were again a revolutionary thing of 2018. It became popular and led to the surge of ICOs and tokenization, paving the way for a complexly digitally functional system.

Provenance, immutability, decentralization, and transparency are the underpinnings of Blockchain. It is because of these features of Blockchain that we see it finding application in most of the business vertical. As far as the current scenario is concerned, the use of conventional technology is not very efficient. In fact, it has raised issues like data security, centralized data storage, in-efficient data tracking and other problems that plague the current system. Blockchain will help in overcoming all these problems by leveraging a platform with decentralization as a key feature and will have the information distributed in the entire network.

With all this and much more stored in it, Blockchain holds a lot of prospects for the future. Let us see what will 2019 bring for Blockchain.

5 predictions for Blockchain in 2019:

Conclusion – 2019 has just kicked off, and the positivity that surrounds Blockchain will continue this year as well. Nations like China have focussed on promoting the startups that are working in promoting Blockchain and developing its application.

Importance Of Blockchain In Healthcare Data Management
Scroll to top