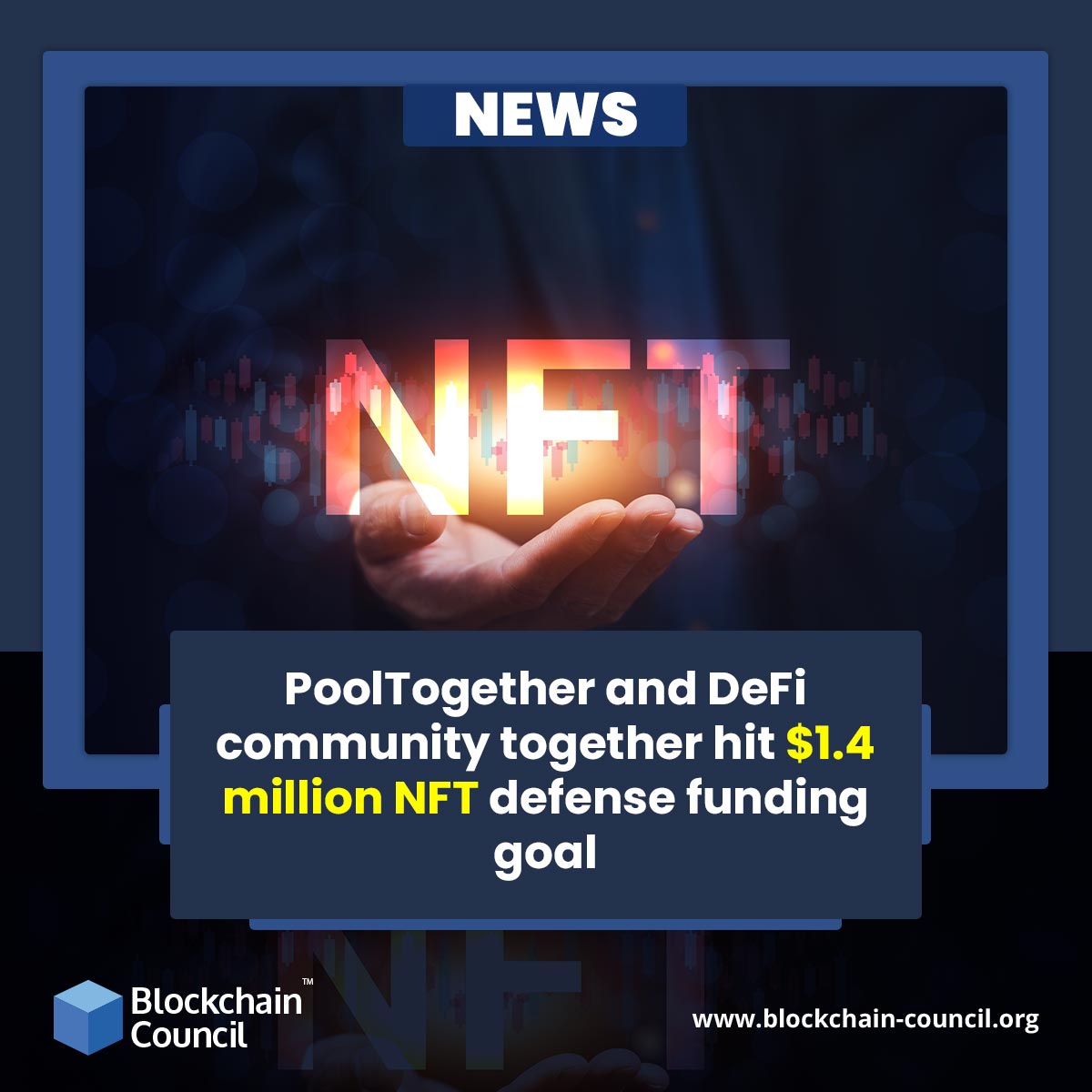 Through the sale of NFTs, PoolTogether, a no-loss lottery decentralized finance (DeFi) platform, has raised 100% of its legal defense fundraising goal.

The initiative reached its financial target of 769 Ether (ETH), or $1.4 million, in just ten days, indicating significant support from the DeFi community, which is uniting against a lawsuit that some believe is an attack on the whole industry.

PoolTogether is now selling three levels of NFTs as part of a “PoolyNFT” fundraising effort to fight a class-action lawsuit it believes has “no basis.”

The NFTs are offered at various prices. The NFTs value starts at 0.1 ETH, 1 ETH, and 75 ETH per token. These values depend on the total amount of tokens generated, and the initiative will ultimately roll out ‘hodler utility’ for the NFTs.

PoolTogether’s fundraising endeavor achieved over 471 ETH last week, according to a popular tabloid, with backing from notable names in the crypto field, including Chris Dixon, general partner of Andreessen Horowitz, who acquired a Pooly Judge tier NFT for 75 ETH, or roughly $141,000 at current rates.

At the time of posting, the total amount raised was 788.40 ETH, or about $1.474 million. The campaign has 16 days left, and if all of the NFTs are sold, the campaign will have raised $1,076 ETH, or $2 million.
On June 6, the PoolyNFT team tweeted the achievement, stating that “over 4,200 distinct wallets are currently holding Poolys.” It’s amazing to witness what the community has accomplished by working together.” Leighton Cusack, a co-founder of PoolTogether, also stated:

“I’m at a loss for words right now.” I’m astounded by how supportive the community has been of PoolTogether Inc and me.”

Pooly holders are a special group of people.

If you are interested in offering special perks to Pooly holders. DMs are open to collaborate.

The former digital head for Senator Elizabeth Warren’s 2020 presidential campaign, Joseph Kent, has launched a class-action legal battle against the DeFi project after spending only $12 on lottery tickets through PoolTogether in January.

According to Kent, PoolTogether and its allies are operating an illicit lottery in New York, and he’s claiming double the amount he invested in PoolTogether (a whopping $24), as well as double the amount of attorney’s fees and legal costs that are permissible.
Kent also expressed a general dislike for cryptocurrency in his complaint, citing concerns about fraud, environmental harm, and Ethereum’s high gas fees, among other things, implying that his annoyance with the cryptocurrency extends beyond PoolTogether.

The lottery winner gets the majority of the money, with a few runner-ups getting a smaller share and the rest of the people getting a full refund.

If you want to learn everything there is to know about cryptocurrencies and blockchain technology, the Blockchain Council’s comprehensive certification program is for you. During the courses, students obtain objective and practical information in an easy-to-understand way. They’re inexpensive, and they allow you quick access to the fast-expanding crypto market.

What is a Blockchain Oracle, and How Does it Work?
Scroll to top