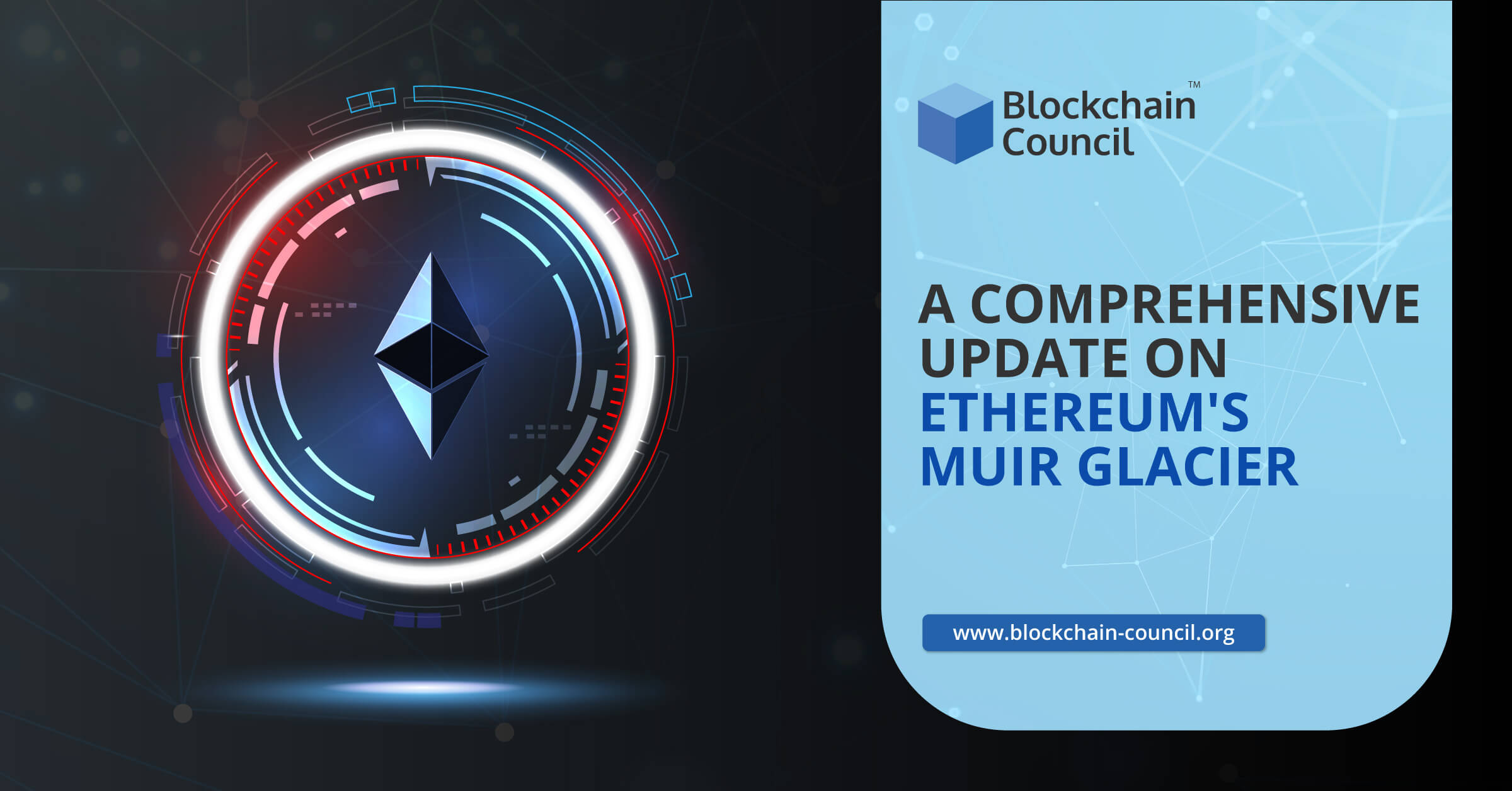 Ethereum welcomed the new year 2020 in the best possible way- with a network upgrade. The Muir Glacier hard fork network upgrade was activated on 2 January 2020 at block number 9,200,200 with a single Ethereum Improvement Proposal (EIP). Muir Glacier is a routine network update. Let us get to know more about this in this article.

What is Muir Glacier?

It refers to a proposal for delaying the network feature of the Ethereum blockchain named ‘Ice Age.‘ The process of mining Ethereum blocks will be more time-consuming if they are mined using the proof-of-work consensus unless the Ice Age is pushed back through a hard fork. The feature was primarily developed in the protocol to motivate developers to upgrade the network actively. So, the Ice Age began taking effect much earlier than expected. This created the need for developing another fork close to the previous fork. Muir Glacier is a routine network update. All the services will remain operational at the time of the fork. EIP 2384, the proposal using which the Muir Glacier upgrade was activated, delays the difficulty bomb for 611 days (4,000,000) blocks.

Though subsequent changes and network upgrades to the difficult bomb have been accompanied by a change of issuance of Ether, no reduction occurred in the Muir Glacier Upgrade. Hence, the issuance remains at 2 ETH per block.

What is the Ice Age?

Ice Age or Ethereum difficulty bomb is an algorithm that has been designed to increase the difficulty of mining Ethereum blocks over time.

History of the Difficulty Bomb?

So, what is the reason for the existence of the difficulty bomb?

The concept of the difficulty bomb originates from the initial design of Ethereum. Ethereum has most often operated under the ethos of ‘continuous innovation.’ This implies that frequent upgrades need to be done to the Ethereum blockchain. Network upgrades are a costly affair for the network as, in that case, each node on the network must be upgraded to the latest version of the protocol. If the nodes fail to undergo an upgrade, it will result in them being forked off the network. The coordination costs associated with upgrades have also implied that blockchain projects avoided them.

Reason for Non-Inclusion in the Istanbul Hard Fork

As it is typically done, the mistake this time was not to combine the reset with the recent Istanbul upgrade. A misjudgment occurred based on a miscalculation regarding when the impact of the bomb would begin to be felt. Original estimates pointed to the summer of 2020, but the first signs of the bomb started to show on the network, even in October.

With respect to protocol changes, there were discussions regarding the Ethereum developer call and various forums such as Ethereum Magicians. Anyone can listen to or participate in Ethereum calls and Ethereum Magicians as it is open to all. These are open-source communities that allow anyone to be a part of their development and discussions.

Can a Difficulty Bomb Be Removed?

Yes, it is possible for a difficulty bomb to be removed, but it would need another network upgrade. Though several people have argued informally in the past about removing the bomb, there has not been a proper proposal to do so. The Meta-EIP that is associated with the Muir Glacier upgrade talks about some of the rationales for the bomb and potential future improvements.

The Ethereum community recently discussed the idea of removing the bomb once Eth 2.0 is live and finalizing blocks on the 1.x chain with the help of the finality gadget. The primary purpose of the finality gadget is to leverage a property termed ‘finality’ of the Casper proof-of-stake consensus protocol for deployment in Ethereum 2.0.