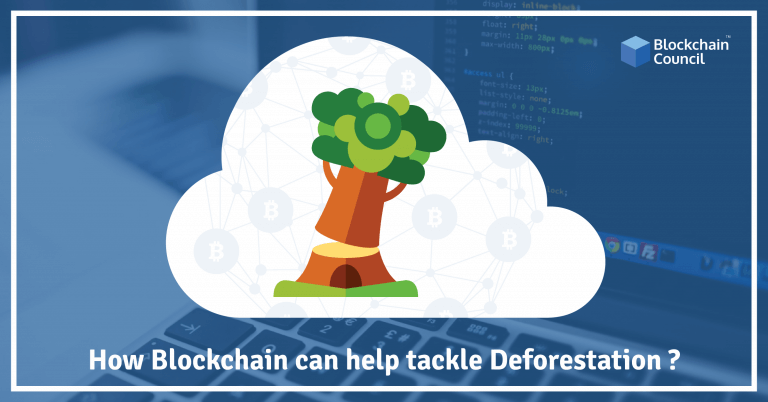 Our world is firmly knot, and this has become fact after the development of the internet technology which has merged the boundaries and brought people together. Another technology which is acting as a catalyst in the creation of universal platform is the blockchain. Being a new technology with a multitude of features makes it the most futuristic technology. We have often heard about blockchain and its association with bitcoin and other cryptocurrencies, but, its application is more than a just financial transaction. There are many different spheres which blockchain can affect and in this blog, I will try to give a new perspective on this technology.

Before we head further and understand how blockchain can handle the problem of deforestation, we must first understand the two concepts.

Blockchain as many of us know is a shared database where information or transactions are stored in chronological order. This database is not centralized place instead it is distributed across various nodes. So we can say that it is a distributed ledger technology or DLT making use of the peer-to-peer network to validate and verify the transaction. This distribution of data across different nodes makes the information tamper-free and immutable.

A deforestation is an act of clearing the wide area of forest for urban use like buying apartments, houses, ranches, etc. This clearance of forest is not merely restricted to climatic change, but at the same time, it also results in side effects like global warming, pollution, poor rainfall, lack of welling places for wild animals, etc.

Many governments have banned the deforestation but people continue to do this act to meet their business goals.

Now the question arises, how will blockchain help in reducing deforestation. Let’s analyze this ahead-

The potential for blockchain and forests

The immutability and data storage features make blockchain helpful for various other processes than financial transactions. Let’s see how can it help us bring back to safeguard our forests. As mentioned above, halting the process of cutting down of trees is is the best way to save the climate and nature. Companies like Ecosphere+ are now focusing on monetizing the carbon stored in the forests. Here is how the company has found practical ways in which the  blockchain can be useful in the same :

We all know that easy traceability is one of the key features of the blockchain. It means that you can track the product from the one to origination to the point of consumption. Using the similar approach we can trace the carbon credits. In the traditional system, all this information is not automated. With the help of blockchain, we can strengthen the carbon registries by storing it all in the DLT. This will make it easy for the people to track the carbon credit’s journey.

As mentioned above, the prime reason behind deforestation is to create urban space and place for other usage, people also cut down the forest for products like palm oil, lumber, and other commodities. Although, companies have vouched to stick to no deforestation pack to make the products how can we be assured of the same. Though, blockchain cannot change the scenario overnight but, it can defiantly introduce transparency. Making use of blockchain-based timestamping of the data and location with the product number, we can trace the origin of products. This requires the amalgamation of blockchain with IoT. Companies like McDonald’s and L’Oreal have come together to join CDP, a new;y expanded supply chain platform. It drives companies and governments to protect the forest, save water resources and reduce the emission of greenhouse gases.

Moreover, a Programme for the Endorsement of Forestry Certification is also planning to use blockchain technology to trace wood products.

Although, these initiatives to control the activity of deforestation and at the same time, it also propagates the idea of managing the climatic change by using Blockchain Technology. Blockchain holds a promising future but all these projects are at a very nascent stage, and it will take time for this technology to become a part of the mainstream.