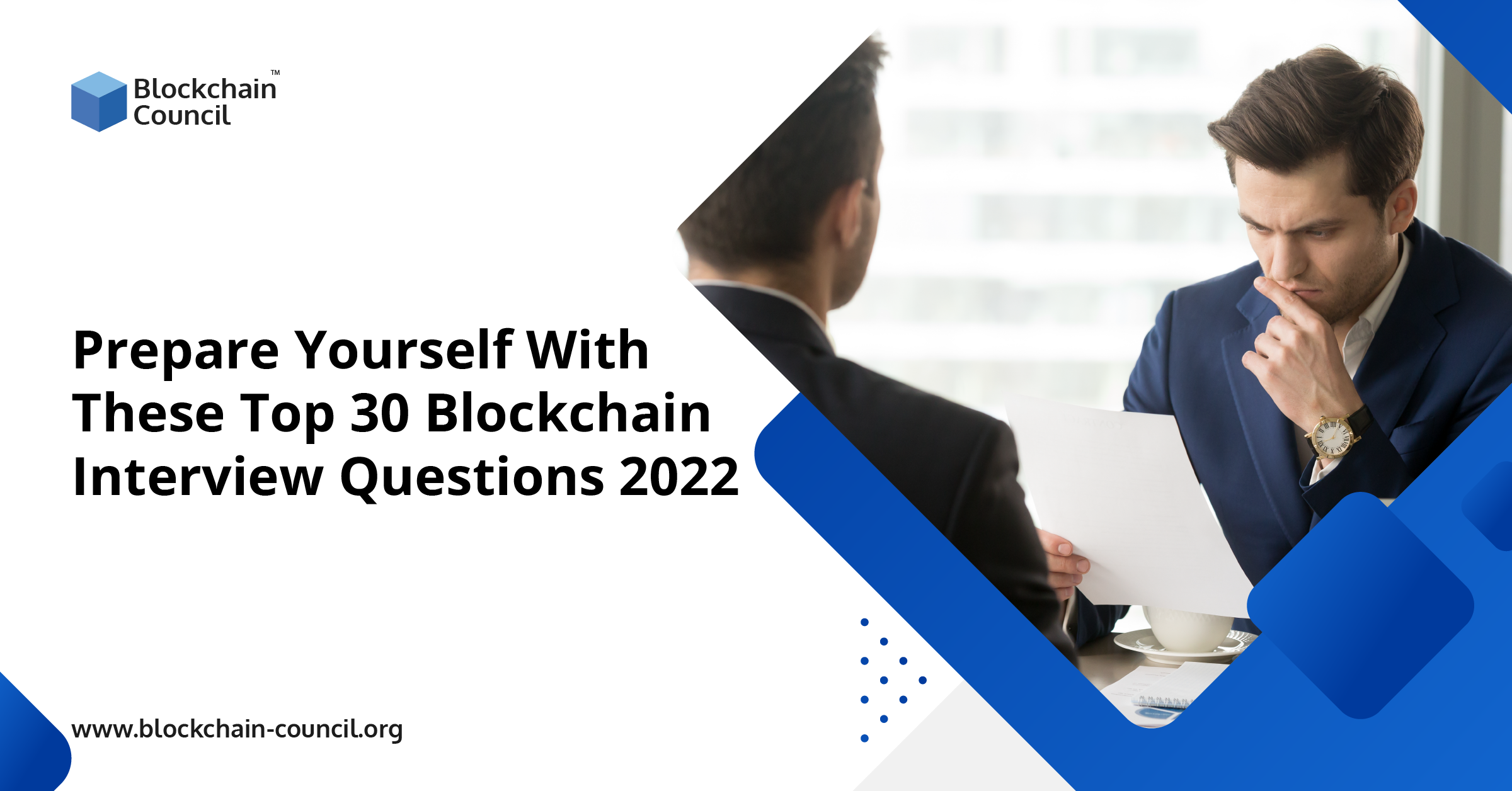 Do you want to work in blockchain technology based companies? If yes, then we’re here to help you prepare for a major interview; we’ve compiled a list of the 30 most often asked interview questions. These questions are crucial for an aspiring blockchain professional to have knowledge of. Let’s begin.

Some important interview questions on the blockchain you should prepare for

Let’s look at the most frequently asked questions about blockchain technology in this part.

1. What are Bitcoin Blockchain and Ethereum Blockchain: Note the differences.

Both Bitcoin and Ethereum have immutable records stored in decentralized, distributed databases. As an alternative digital currency, Bitcoin provides many benefits. In contrast, one can recognize Ethereum as the king of smart contracts, permitting peer-to-peer contracts and applications through its currency known as ETH. Hence, the design of Ethereum was to work alongside bitcoin rather than as a substitute for bitcoin.

2. In what ways does Blockchain differ from conventional databases?

While conventional databases have a central ledger, blockchain technology has a distributed ledger, implying it does not have a solo server. Due to its complete transparency, which is unlikely in a centralized ledger, it is a very reliable technology.

3. What is and how is double-spending prevented?

It’s the act of re-transacting a particular cryptocurrency’s balance more than once. Furthermore, one can accomplish this by tricking the network into believing that the initial amount is never spent, making it accessible for repeated transactions.

4. In your opinion, which blockchain technology is the best: Private or Consortium?

Each type of Blockchain has distinct characteristics, applications, and needs; however, a private blockchain is an all-in-one solution for building your corporate blockchain network. Also, organizations looking to expedite communication with each other would need a consortium blockchain, on the other hand.

5. How are ICOs and IPOs different?

There is a fundamental distinction between an Initial Coin Offering (ICO) and an Initial Public Offering (IPO). Both have a different way of issuing. It takes a long time and a lot of effort to calculate the market value of each share in an IPO. In addition, while an IPO requires attorneys, banks, and a lot of patience, an ICO, one requires programmers and a good Internet connection.

6. Can you name a handful of the most popular development platforms for blockchain applications?

Hyperledger Fabric, Ripple, Ethereum, R3 Cords, and Quorum are some of the leading Blockchain-based app development platforms. Blockchain developers must consider factors like scalability, type, popularity, etc., before choosing any one of these platforms.

7. Is there anything you’ve heard about the Lightning Network?

The lightning network is an off-chain micropayment mechanism that speeds up the Blockchain’s transaction processing time. Furthermore, members of the lightning network may engage in countless microtransactions with each other without requiring the miners to provide anything in return. Then the system uploads an entire transaction set to the blockchain after the locking of the payment channel. Here, one can instantly make the transactions without relying on miners. In addition to allowing for micropayments and multi-signature transactions, the network’s decentralization eases the strain on the main chain and speeds up transaction times.

8. Determine if something is fungible or non-fungible.

When one can trade an equivalent token for any other token of the same kind if it is fungible, one cannot use non-fungible things interchangeably. As a result, non-fungible tokens are not convertible with fungible tokens, as they cannot substitute for each other.

9. Explain the meaning of the Blockchain wallet.

A blockchain wallet is an electronic or virtual wallet. We can digitally store, transfer, and manage cryptocurrencies such as Bitcoin (BTC), Ethereum (ETH), and many others using a blockchain wallet.

DeFi platform’s autonomy enables cross-border payments to be made more cheaply and quickly. It is an efficient way to trade.

11. What are the prerequisites for establishing a blockchain technology in business usage?

For starters, here are a few:

12. What is mining on the blockchain?

The practice of verifying a blockchain’s transactions by the miners without the involvement of a third party is known as “blockchain mining.” Also, the transaction pool receives every transaction submitted from a crypto wallet. Moreover, to create a block, miners choose hundreds of transactions and combine them with additional overheads like Merkel Root, SHA-256 Hash, Nonce, etc.

13. List a few of the most useful tools for building a blockchain.

14. In your opinion, what are some of the most pressing issues in the adoption and scalability of blockchain technology?

15. What are Blockchain’s drawbacks?

It’s a challenging technology to learn and apply because of its complexity. Furthermore, another difficulty with Blockchain technology is scalability. Plus, network speed and transaction costs can vary, and there’s always a chance of human error.

16. In Blockchain, can a block (or blocks) be removed from a network?

No, we cannot manually remove a block. However, one may use default settings and filters to eliminate blocks. Therefore it is possible to re-download deleted blocks whenever necessary.

17. What are some of the most important aspects of the technology of Blockchain?

Transparency, immutability, security, and transaction fee reduction are some of the most important aspects of Blockchain technology.

18. Write about several kinds of consensus algorithms in your answer.

19. Describe how the PoW consensus works.

For PoW consensus, speed and accuracy are the most important considerations while attempting to evaluate difficult mathematical problems. Here, miners compete by doing faster computations to find a particular block’s hash. The first miner to find the solution gets the reward in the form of crypto coins.

The PoS mechanism verifies each block before the network can add another block to the blockchain ledger. In contrast to PoW, in PoS, miners may participate in the mining process by staking their coins. Therefore, it requires only a few hardware and software resources for users to mine. Also, the more coins a miner has, the higher their chances are to dominate the consensus, which means that only the wealthiest can have control of the consensus.

21. What is the definition of CBDC?

CBDC stands for Central Bank Digital Currency, which is backed by national credit and government authority and is directly managed by the country’s central bank. Hence, one can store and use CBDC as a digital version of central bank money to make electronic payments.

In the context of financial services, decentralized finance refers to the use of smart contracts and distributed ledger technology (Blockchain technology) to eliminate the need for a central authority to oversee the transactions.

23. What is the meaning of Hyperledger Fabric?

As a distributed ledger platform, Hyperledger Fabric offers scalability, flexibility, and performance designed to meet the company’s needs. Moreover, this Enterprise-grade DLT blockchain developer platform is flexible and versatile for a wide range of industrial use cases, such as banking, healthcare, supply chain, and human resources.

24. Smart Contracts: What Are They?

The term “smart contract” refers to computer code that enables the exchange of value, whether monetary, in the form of content, shares, or anything else. Plus, smart contracts are self-executing computer programs that execute a transaction when certain criteria are satisfied.

25. What are dApps, and how are they different from other types of mobile apps?

DApps operate on a P2P network of computers rather than a single computer. Popular, inventive, and feature-rich dApps include Cipher and Chainlink.

26. Describe the function of Blockchain technology in governance.

Decentralization, integrity, and openness are just some of the advantages of blockchains in governance that make them more popular. Therefore, blockchain distributed networks may help governments run more effectively and develop more confidence among their populations by boosting transparency and expediting the revenue collecting process. However, it would be possible with a skilled blockchain expert team in place.

27. List a few blockchain-related misconceptions that need to be dispelled.

28. Are there any limitations on record types while using Blockchain?

It’s not like that at all. Depending on your needs, you can keep any kind of record. Records of transaction processing, business transactions, identity management, health management data, and other critical paperwork are the most often recorded types of data in the blockchain. In addition, blockchain technology may also store other types of data.

29. Is Blockchain a secure method of doing business?

Blockchain technology is unquestionably a safe and tamper-proof technology that facilitates sharing of important data between participants.

30. Do you have any predictions for the future of Blockchain?

Blockchain technology has the potential to open up whole new avenues for economic exchange and make a significant contribution to the growth of the global economy. As long as widespread acceptance isn’t reached for the blockchain degree, the way firms function and the IT sector’s environment will alter irrevocably. With the increasing adoption of blockchain-based services, demand for blockchain engineer professionals may rise globally.

MyEtherWallet Opens the Door to Access More Than 2,000 Ethereum-Based dApps...
Scroll to top